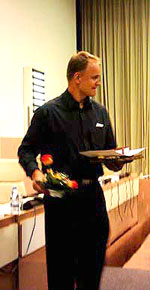 Ivo Dvorak, from the Czech Republic, was conferred the first award at the International Habanasommelier Contest, after undertaking a theoretical test and the selection rituals, lighting, descriptive tasting and brotherhood with diverse drinks.

Dressed in his sommelier suit, Dvorak made a theoretical test, and proposed the brotherhood between an Hoyos de Monterrey Doble Corona cigar and the Godet Poire Cognac from the distributor agency Redtimes Trading.

“Before the second and last round of the competition began, Simon Chase, President of the English company Hunter and Frankau, made known the verdict, the Cubans Joel Begué, Leonel Marcelo, and the German Matthias Martens being finalists too.

The four contestants carried out their rituals before the judges and the participants to the VI Festival, and displayed rigour and skills in their demonstrations.