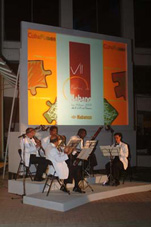 The VII International Habano´s Festival, the most eagerly-awaited event for all who love smoking premium cigars, was inaugurated in Havana’s Museum of Fine Arts on February 21 with a ceremony in which dancing and music blended with art and smoking.

Around a thousand people from 52 countries attended the welcome cocktail party, which included a show of music and dancing. During the ceremony, guests enjoyed the best of Cuban cuisine—and the best H abanos.

Oscar Basulto and Fernando Domínguez, Co-Chairmen of the Habanos, S.A., Corporation, presided over the inaugural ceremony, welcomed everyone and announced the nominees for the Habanos Awards for 2005 in the different categories.

The nominees in the Production category are Eumelio Espino, of the Cuban Tobacco Research Institute, for his contribution to research and the development of Cuba’s tobacco production; tobacco grower Armando Trujillo, for his contribution to improving the yield of tobacco; and Aurelio Reyes, for the excellent harvests he has obtained in recent years, which have made it possible for Habanos to gain world renown.

In the category of Retail Sales, the nominees are Michel Permeke, of Belgium, for the good results scored by his shops in the Belgian market; Edward Sahakian, of England, for his contributions to the growth of direct distribution among British smokers; and Vahé Gerard, of Switzerland, for his dedication to the world of tobacco and contribution to the recognition of Habanos as leading product at the world level.

In the Business category, the nominees are Zainal Mohebi, of the United Arab Emirates, was nominated for the important investments he made to establish and develop Houses of Habanos in the Middle East; Urs Tanner, of Switzerland, was nominated for his important work in the Swiss market, where he has doubled sales between 1995 and 2004; and George Fereos, of Cyprus, for his passion and dedication in seeking alternative ways to use market potential.

In the Communications category, the nominees are Mario Duarte, of Portugal, for the intensive work he has done in the sphere providing information and educating smokers of Habanos; Adriano Martínez, of Cuba, for his contributions in spreading the culture of tobacco; and British actor Jeremy Irons, for his contribution to improving the image of Habanos internationally with his public projections.

The awards will be presented on Friday, February 25, during the gala dinner that is now a traditional part of the annual International Habano Festivals.

Habanos , S.A., a world leader in the premium cigar market, sells Habanos both in Cuba and in the rest of the world. It has an exclusive international distribution network, with outlets in more than 120 countries.