Fabien Garrigues, UK representative and sommelier at the Hotel Malmaison and the Hotel du Vin in the UK, was announced yesterday as the winner of the VI International Habanosommelier competition held in Havana, Cuba, during the 9 th Habano Festival. 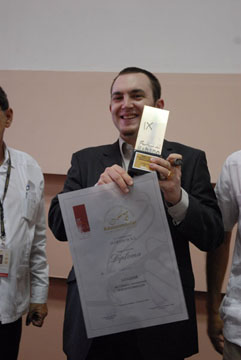 Garrigues, a 26-year old French national, won the jury’s favor with a match between a Romeo y Julieta’s Short Churchill and a Mendoza brandy.

After being runner-up in the preliminary round of the International Habanosommelier Competition held last November 2006 in London , Garrigues has won the Best Habanosommelier 2007 Award over the Spanish and Cuban contenders in the final.

Garrigues had to pass a theoretical examination to classify for the final, in which he demonstrated his knowledge of the different Habanos brands and factory names. The UK sommelier proved his competitiveness and received the highest score, followed by the Spanish and Cuban representatives.

At the final, Cuban Ernesto Cárdenas, from the Hotel Tryp Habana Libre, Spaniard Arnau Marco, from the Restaurant de Racó d’en Cesc in Barcelona , and Garrigues had to compete in a Habano cutting and lighting test, a descriptive tasting and combining Habanos with a range of different drinks. 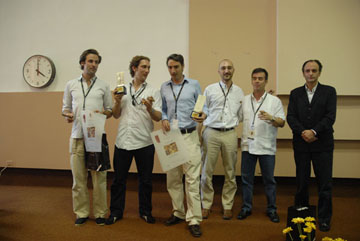 Last Thursday, the 9th Habanos Festival held the final of the second edition of the Habanos Armagnac Trophy. The winners were a pairing between a Churchills from Punch and the Armagnac Jean Cavé Hors d’Age in the Blended category.

In the Vintages category, the winner was a combination of an Armagnac Delord 1978 and a Partagás Churchill de Luxe. This is a blind taste that all participants go through, and the winning combinations are the most voted by the participants.

In the competition held in Paris last January, 27 Armagnac brands participated; only eight of them qualified, four in each category. During the preliminary round held last Monday in Havana , two more were discarded and only two finalists remained in the Blended category, and two more in the Vintage category .

Different aspects are taken into account for the selection of the best combination, such as balance, harmony and the pleasure of enjoying a good Habano in combination with the best brandies.