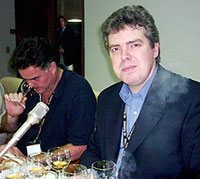 A blue smoky cloud filled the room where the preliminary to the Whisky and Cigar Challenge Contest was developing. Meanwhile, in the anteroom to the International Habanosommelier Contest, reporters were seeking the flavour of an exclusive for their newspapers.

Somebody had to go to the corridors to take a pure air breath, the most exalted participants came closer, distrustful, uttering lowly, “.but this is an event to smoke.” In such a situation, there is really no telling explanation. Once and once again, the cigar fragrance frisked all over our clothes … and our minds too. There is no pleasure as exclusive to smoke lovers as a perfect brotherhood between the drink and the cigar.

Damian Riley Smith, director of the Scottish publication Whisky Magazine, presided over the tasting ceremony of the preliminary to the Whisky and Cigar Challenge Contest. With his unique smelling sense for this occasion, he emphasised the goals of the call and, with the seriousness of such a requirement, told that during the first Scottish round held right 4 weeks ago, they forgot to turn off the fire alarm and more than few jumped up from their seats, thus bringing about a liquor earthquake on the tables.

Following the use of his fellow citizens, Mr. Riley Smith added a portion of water to the drink and encouraged the other tasters to savour the drink and the cigar the best way, because any combination may be interesting in the Lord’s vineyard.

In the corridors of the already traditional seat of the Habanos Festival, the sommeliers awaited their turn to show their skills in cigar cutting, lighting, tasting and brotherhood with different drinks, whereas the last details for the inauguration were made at the Commercial Fair.

One of the participant proposed to make a brotherhood between an Habano and a rarest beer from a limited production, when watching the Russian contestant, Ekaterina Ponomareva, pass the heavy exit door, it was able to see her nervous disposition after the proposal was finally undertaken.
The jury stated that three finalists would emerge from the 3rd International Habanosommelier Contest, and their names will be announced next Thursday. Thursday is the day to disclose any mysteries. The result of 400 judges´consensus: the best combination among the 8 whisky brands and the two prestigious Habanos, will be known at this time too.

Habanos S.A. Corporation put at the articipants´disposal the four cigar brands launched in 1999, at the 480 Anniversary of the Foundation of the San Cristobal de La Habana Villa, the names of the cigar brands corresponding to the four fortresses built by the Spaniards in colonial times: El Morro, La Fuerza, La Punta and El Príncipe.

With an argument and a script written by Enriquito Núñez Rodríguez, Havana had three times. The VI Habanos Festival awarded its participants with a magical night, while they savoured the really excellent menu prepared for this occasion. 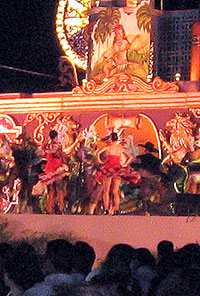 A selected white wine, a 2001 Season Chardonay Falernia Vineyard, complemented the composition of the first course. The secret of the Siboney Casserole lied in the texture of the Maize Tamale and the praised-to-the-sky Barbecued Shrimp that complemented the combination.

The Second course, San Cristobal de La Habana Stew, succeeded because of the mixture of Stewed Deer with Caña Santa fragrance, and Ravioli made up of pumpkin filled with fried plantain. This option extolled the guests´taste with the always appreciated company of a Cabernet Sauvignon Joan Sardá Red Wine, 2001 Season.

But lovers of sweetness were surprised by the elegance of the dessert. Together with the Joan Sardá Bourbonnais semisweet white wine – of the same season as the previous one –landed the magic Chocolate Rolls filled with mojito-fashioned mouse, with coconut biscuits and Cuban-styled coffee, accompanied by truffles with white chocolate and rum-fashioned plums.

Three moments in a Festival