Havana, March 3, 2006.- Corporación Habanos presented this morning the most expensive and exclusive Habano cigar in history, to be marketed in 40-unit containers, at a selling price of 15,000 Euros. The Cohiba Behike has the same length as the Lancero and the same girth as the Siglo VI, the two factory rings that have contributed to build the prestige of this brand. Corporación Habanos announced that this 4,000 cigar production lot is unique, for it will not be produced again.
Ever since Corporación Habanos conceived this project originally to commemorate the brand’s 40th anniversary, the project has remained completely secret. To that end, plants from the seed bed, the best growing fields of Vuelta Abajo, and even the best growers were selected. The outside wrapper leaf is made by Pancho Cuba, Alejandro Robaina and Antonio María Paz, three of the most prestigious growers in the world. 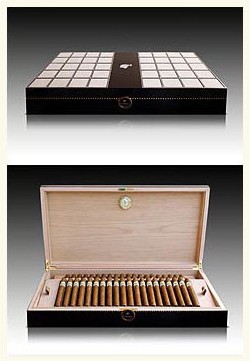 The careful selection and special care, the unique manufacturing process – all cigars have been hand-rolled by Norma, the most senior of the El Laguito cigar rollers – and the high quality production standards, give this Habano cigar unique characteristics.

The 4,000 Cohiba Behike cigars will be sold in 40-unit containers – double-ringed and numbered from 1 to 4,000 – presented in 100 humidors made by the prestigious Paris-based company Elie Bleu.

This is a unique humidor, for its design and its materials: Galuchat, or manta ray skin, one of the most luxurious materials in the history of decoration; black ebony, mother of pearl, sycamore, cedar and ox bone. In certification of its exclusive nature, humidors will include a plate with the humidor number (from 1 to 100) the Cohiba Behike lot number it contains, and the owner’s name.

The price of each of these 40-cigar containers is 15,000 Euro, and will be sold only upon exclusive order to Habanos S.A. dealers.

This new vitola will be presented during the Gala Dinner of the 8th Habano Festival, which is celebrating this year the 40th anniversary of the Cohiba brand.

HABANOS S.A. presents the most exclusive and expensive Habano in the world