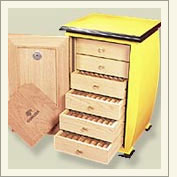 Cohiba. The taste of success

One of its main characteristics is based on the fact that it is the only brand that undergoes a third fermentation in the tobacco used for making it. This process adds even greater balance to the unmistakable taste of Cohiba.

All the Cohiba cigars can be recognised by their distinctive band where the orange, white and black colours stand out. They are all made Totalmente a mano –Totally made by hand- with the best, specially selected leaves.

The humidor will be available exclusively in “La Casa del Habano” international network in next weeks.