Habanos S.A. presents the H. Upmann Humidor which is the result of the skilled hands of Cuban craftsmen. 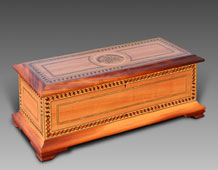 It’s a duplicate of ancient humidor of which only 200 units will be produced enhancing the exclusivity that surrounds it.

Herman Upmann was a banker from Germany who so loved Cuban cigars that he moved to Havana in 1844 and set up as both banker and cigar maker. His bank closed in the early 1920s but his cigars live on as a fine example of an elegant light to medium-flavoured Habano. 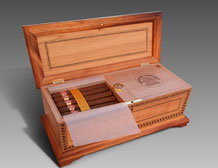 All leaves in H. Upmann are from the Vuelta Abajo tobacco region and they are long filler, premium cigars totally hand made. Its excellence regarding the quality of their cigars are shown in the shape of gold medals in no less than eleven international exhibitions during the 19th Century and adorn the box as does Herr Upmann’s personal signature.

This humidor contains 50 Habanos from H.Upmann which are known as Tacos Imperiales measuring 49 of girth and 168 mm in the length.

Appealing to connoisseurs who prefer a light to medium smoke, unmistakably found in the brand, this beautiful masterpiece will be available exclusively in “La Casa del Habano” international network in next weeks. 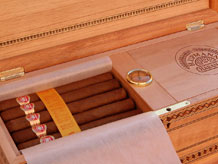