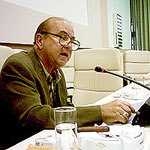 Miquel Barnet, President of the Fernando Ortíz Foundation and Vice-President of the Union of Cuban Writers and Artists (UNEAC) attended for the first time the International Seminar taking place within the framework of the Habanos Festival in order to impart a Master Lecture.

The link of Havana City with the San Cristobal de la Habana brand was the core of his dissertation, which built on those references provided by the chroniclers of the time the Cuban island was discovered, who assured that getting in touch with tobacco did not make Europeans appraise the value of the fragrant leaf at that time.

Tobacco was associated to the natives´healing rites and religious beliefs – he pointed out. After the destruction of the aboriginal culture and mythology, the mythical-religious properties of inhaling the leaf smoke were reduced to individual practices, a fact that led to the eventual incorporation of the smoking art among Europeans.

According to Barnet, the clues leading to the first tobacco smoker in Europe point at a crew member of Christopher Columbus’s first voyage, who decided to take back with him some tobacco samples so as to smoke before relatives and friends, though such a temerity accounted for his being accused by the Saint Inquisition of being possessed by the Devil.