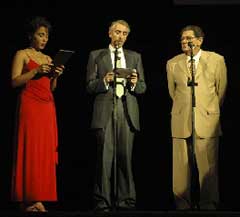 Havana, February 28, 2006. – The 8th Habano Festival, highlight of the year for premium cigar lovers all over the world, opened yesterday at the Gran Teatro de La Habana.

The famous British actor Joseph Fiennes, guest of honor of the Festival, dedicated to the audience his performance of a fragment of William Shakespeare’s work. Fiennes gained international recognition when he played the role of the famous British playwright in John Madden’s hit film Shakespeare in Love (1998), with Gwyneth Paltrow.

During his performance, Joseph Fiennes said that in Habano cigars he “found the same harmony, strength and passion present in Shakespeare’s Romeo and Juliet”. The actor declared that after his stay in the island, he has joined the ranks of the Habano aficionados; just like Sir Winston Churchill, who developed a passion for fine cigars after his first visit to Cuba as correspondent of the Daily Graphic, back in 1895.

The opening ceremony was chaired by Oscar Basulto and Buenaventura Jiménez, Co-Chairmen of Corporación Habanos, who welcomed all participants and presided the nomination ceremony to the Habanos 2006 Awards in the different categories.

During the welcome speeches, the Co-Chairmen stressed two points. On one hand, the constant increase in the number of visitors every year, which in Buenaventura Jiménez’s opinion, “proves the growing interest on this unique event among lovers of Premium cigars the world over”. On the other, the leading role that brands play, which according to Jiménez, “are the real treasures of Habano cigars, since they not only give our brand tobacco a name, but also personality, subtlety and scent”.

Oscar Basulto announced a great surprise from Cohiba, to be revealed on the final day of the Festival. He also predicted a good year for the industry and offered a warm invitation to the next edition of the Festival, “this year – he said – the harvest has been excellent. A simple sentence, easy to say but hard to achieve. You can feel confident that upon your return next year we will be waiting for you with open arms and new Habanos, the best cigars in the world.”

During the evening, a new and much-awaited vitola will be presented: the Short Churchills, the robust cigar missing at the Romeo and Juliet range of vitolas, together with the new image for the brand’s containers.

This new ring is named after Winston Churchill, a devout smoker of the Romeo y Julieta brand. Since his historic visit to Havana in 1947, his name has not only used for Habano rings, but on the most famous of all, the Churchills or Julieta No.2, a cigar with 47 mm of girth and 178 mm of length.

Romeo y Julieta is today a prestigious international brand offering an extensive range of Habano rings, all of them completely hand-made with long-filler tobacco.

A crowd of nearly a thousand attended the performance of “Shakespeare and his masks” and the ensuing welcome cocktail, where visitors were treated to the best of Cuban cuisine and the best Habano cigars.

These awards seek to reward the effort and dedication of all nominees to the world of Habanos; thanks to their excellent professional services, the market has grown dramatically.

In the Retailer category, the nominees were Fred S.C. Kiang, President of Sun Rise, Duty Free of China, for his contribution to the sales of Habanos over last year; Francis Mathieu, a famous French tobacconist, who built the first walk-in humidor of France and was a promoter of the French Habano Club; Ricardo Aramburu, second client for Altadis in terms of size, Spanish Habano distributor; Andrea Vicenzi, President of Diadema, exclusive Italian Habanos dealer, in recognition of his specialized work in Habano stores and the creation of over 25 Smoker’s Clubs in Italy; Javier Socorro, a Spaniard whose Canarian ancestors purchased raw tobacco from Cuba to sell it in the Canary Islands, making turning the Socorro company into the first distributor of raw tobacco in the Canaries.

In the Communication category, the candidates are Nicholas Foulkes, known in the trade press as “Bolivar”, an independent UK reporter who writes for prominent media such as How to Spend It, GQ and Country Life, and James Suckling, a prestigious, unbiased and independent reporter, who writes for some of the best trade magazines, such as Cigar Aficionado.

In the Production Category, nominees are Antonio María Paz Valladares, for his excellent levels of tobacco leave production in San Juan y Martínez, Pinar del Río, one of the best quality growing areas; Gerardo Medina Relova, best producer of sun-grown tobacco of the country; Gerardo Mollinedo Alfonso, for the best 2004-2005 harvest of natural-method sun-grown cured tobacco; and Sinforiano Iglesias Rodríguez, for his excellent sun-grown tobacco leave production, for producing his own seedlings and having full-insurance coverage on his co-op.

Awards will be announced on Friday March 3, during the traditional Gala Dinner that closes the Habano Festival every year.