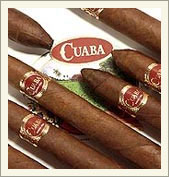 Cuaba, like Cohiba, is an Indian word used by the Tainos in Cuba at the time when Christopher Columbus arrived to the Island. The Cuaba tree had a highly combustible wood that was used to light their ‘cohibas’.

The Cuaba brand recreates the style of cigars that existed in the 19th century, when Habanos pointed at both ends became fashionable. All Cuaba cigars have that peculiar form denominated double figurado. One century later, in 1996, this traditional style was taken up again at the Romeo y Julieta factory, where the Cuaba brand is completely made by hand following the most traditional methods. For that reason, Cuaba brand has been chosen for the recovery of a format so highly appreciated in the range of Habanos: the Salomones.

Because of their complex manufacture, the double figurados are at the height of the roller’s cigar-making art. If only for that reason, they deserve to be a part of the selection of every fan who prides himself on it.

Manufactured with the best leaves from the region of Vuelta Abajo in Cuba and submitted to a rigorous selection, the Salomones de Cuaba stand out for their excellent taste and flavor, with an evolution and complexity in their smoking that will be enjoyed by Habanos lovers.

Presented in boxes of 10 units each and with the traditional medium to full flavour of Cuaba, they are a very valuable option for the true Habano fans, who will find an attractive format in its 184 mm in the length and 57 ring gauge that will please the most demanding palates.

Salomones de Cuaba will be available in the upcoming weeks at the most select sales points around the world.