Vegueros is one of the most recent brands that Habanos, s.a. has launched on the market. Made entirely by hand in Pinar del Río, these cigars have become very popular because of their distinctive aroma, taste and combustibility qualities inherent in all Habanos.

The humidor-cabinet made of cedar portrays the most representative elements of the brand, combining inlay and high relief.

These last two vitolas were made especially for this anniversary celebration.

The picture is made of cedar, with sheets of precious wood, employing traditional techniques of inlaying, combined harmoniously with the sculptural relief.

The set shows the beauty of the world of Vegueros, as depicted in the forms, lines, spaces and wood tones (cedar, majagua and mahogany). Made entirely by hand and designed especially for the 3 rd Habano Festival, it is the work of artists Marlene Silvera Segura and Moisés González Acosta.

Marlene Silvera Segura is a sculptress with six years of experience working in wood. She is a graduate of the San Alejandro School of Art and of the Design Institute. A member of the Cuban Arts and Crafts Foundation (FCBC), she has had individual and group exhibits, both in Cuba and abroad.

Moisés González Acosta, a self-taught artist, has 12 years of experience. He is a member of the Association of Artists and Craftsmen (AAA) and has participated in one-man and group exhibits in Colombia , Cuba , Mexico and Spain .

Lot consisting in a Humidor-Cabinet and a Cuaba Lighter, 5th Anniversary of the Cuaba Brand. 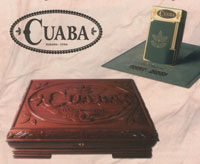 The Cuaba brand, which was launched on the market in 1996, embodies the spirit of the end of the 19 th century. Its tapered vitolas were designed especially for smokers who love antiquities, and their high combustibility honors the name of this brand.

The Cuaba lighter, a part of the Habanera Collection, was made by the St. Dupont Company.

The humidor-cabinet, which bears the hallmark of the brand, was made entirely by hand, of solid cedar.

The humidor contains 100 cigars, 20 Exclusivo, 20 Generosos, 20 Tradicionales, 20 Distinguidos and 20 Salomones Cuabas, made especially for this anniversary.

It is the work of outstanding craftsman Julio César Garrido Correa, of Pinar del Río, who has participated in several international exhibits in such countries as Belgium , France and Spain . His works may be found in private collections, and several of his creations have been sold in earlier Habanos s.a., auctions. He created the Cuaba humidor which was auctioned in the course of the Dinner of the Millennium, held during the 1 st Habano Festival, and the 125 th Anniversary of the Romeo y Julieta Brand Humidor, which was auctioned at the Gala Dinner held during the 2 nd Habano Festival.

The Rafael González highfights the elegance of Habanos with the fines of its design and the classical delicacy of the taste of its vitolas. An ideal combination of a personal style of its own with a long tradition and exclusive history.

The humidor-cabinet made from cedar and bronze, with wooden incrustations exemplifies the classicism of the brand with fines in an Art -Nouveau style. The hallmark of the brand is engraved in bronze on the top.

The upper tray contains 125 cigars: 25 Lonsdales, 25 Panetelas Extra, 25 Slenderellas, 25 Petit Coronas and 25 Conicales, a vitola in which this brand was made up to the end of the ´70s and that was renewed especially for this anniversary.

The lower part of the humidor has room for six boxes of cigars. It is the work of independent creator Carlos Espinosa Vega, from Havana. A graphic designer with a Masters in marketing, he is a member of the Association of Artists and Craftsmen (AAA) and of the Association of Publicists of Cuba (APPC). He has won several awards for designing exhibits, containers and costumes. Among other things, he designed the bottle for Edmundo Dantés rum, which won the 1989 1nternational Fair of Havana’s prize for design. He has also done a lot of leatherwork for Habanos, including the Pirámides cabinet that was auctioned in the course of the Dinner of the Millennium and the 160th Anniversary of the Punch Brand Humidor, which was auctioned during the 2nd Habano Festival.

H Humidor and a Selection of Vitolas of New Brands.

This unique, exclusive humidor made from maple and mahogany, with room for 21 boxes of 25 cigars was donated by the prestigious Michel Perrenoud Company. S.A.

The humidor will be auctioned together with 149 cigars, with a selection of vitolas of the new brands, a box of Espléndido Cohibas, a box of Fundador Trinidad, a box of Don Alejandro Vegas Robaina, a box of Exclusivo Cuabas, a box of El Morro San Cristóbal de La Habana and a box of Seoane Vegueros.

The San Cristóbal de La Habana brand was created on the 480th anniversary of the founding of the city of Havana . Only very limited quantities of this cigar have been available on the market. This brand offers the most demanding smokers a unique mix and an exceptional series of vitolas.

Its vitolas are the recognition of an era, a truly Cuban history. The cedar humidor-cabinet was made entirely by hand and depicts a palace in the Cuban architectural style typical of past centuries.

It contains 100 cigars: 25 of each of its four vitolas: El Principe, La Punta , La Fuerza and El Morro.

It is the work of craftsmen Armando Cotalero Prieto and Neurys Alberto Santana, members of the Association of Artists and Craftsmen of Cuba.

Armando Cotalero Prieto won first prize for applied arts in the 1st Salon of Colonial Art of Cuba, in 1995, and first prize in the International Arts and Crafts Fair (FIART) in 1997. He was one of the Cuban artists whose work was selected for the UNESCO Handicrafts Award for Latin America and the Caribbean. Samples of his work are in private collections in the Bahamas, Canada, Mexico and the United States. He created the Trinidad humidor which was auctioned in the course of the Dinner of the Millennium, held during the 1st Habano Festival, and together with Neurys A. Santana, the Real Fuerza Castle humidor which was auctioned during the 2nd Habano Festival.

Trinidad the most colonial brand of Habanos, whose unique taste, exquisite aroma, and elegant and seductive size make it a perfect companion has quickly become a favorite of those who like to discover the secrets of history and tradition.

The Trinidad lighter, a part of the Habanera Collection, was made by the St. Dupont Company.

This work was especially designed for this auction. The humidor was made from cedar and mahogany, with silver decorations.

It contains 124 cigars: 33 Fundadores, 25 Robusto A, 33 Fran­ciscano vitolas made especially for this purpose and 33 Laguitos No. 1 made in the size customarily used in the era when the brand was available only as gifts from the Cuban Government.

It is the work of gold and silversmith Raúl Valladares Valdés, from Havana.

35th Anniversary of the Cohiba Brand.

The Cohiba brand is world-renowned and sought on all markets by those who love the best cigars in the world. In the 35 years since it was created, it has become a symbol of good taste, exquisite elegance and the distinctive taste of Habanos.

This humidor which was designed and made especially for the 35th anniversary of the Cohiba brand was made from mahogany and cedar, with silver decorations and accessories.

It contains 160 cigars; 25 Gran Corona Cohiba, vitolas made for special occasions, 25 Pirámides, vitolas created specially for the Reserve of the Millennium, 25 Espléndidos, 25 Robustos, 35 Lanceros, 5 Siglo I, 5 Siglo II, 5 Siglo III, 5 Siglo IV and 5 Siglo V. Each of the 35 Lanceros has a silver band portraying the head of the Indian.

The one and a half meter high silver sculpture was inspired by Cohiba’s Lancero vitola. In it, the artist has portrayed the elegance and beauty of tobacco plants and the virtuosity and personality of Cuban cigars.

It is the work of gold and silversmith Raúl Valladares Valdés, a self-taught artist from Havana. In spite of his youth, he has already had over 60 exhibits in Cuba and abroad and won many national and international prizes, including the Picasso Medal, awarded by the World Council of UNESCO, and the gold medal for humidors presented by the International Fair of Havana.

VIPs all over the world own samples of his work. In the world of Habanos, his Habano Man of the Year Trophies are particularly outstanding. He also created the Trinidad humidor which was auctioned during the dinner held on the anniversary of that brand; the Cohiba humidor which was auctioned in the course of the Dinner of the Millennium, held during the 1 st Habano Festival; and the Cohiba humidor and sculpture auctioned during the 2nd Habano Festival.