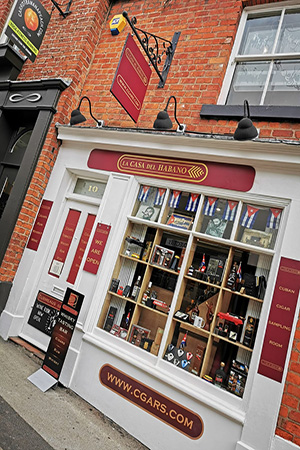 Mitchell Orchant, Managing Director of C.Gars, said that opening a second La Casa del Habano would allow the group to continue the growth in Havana cigars sales and would enable them to have additional availability of La Casa specialities to satisfy their customers’ insatiable demand for the finest cigars in the world.

La Casa del Habano is the name of a network of retail cigar stores franchised by Habanos s.a. There are over 140 La Casa del Habano stores throughout the world on five continents. A full list can be found on the franchise's global website at www.lacasadelhabano.com
Limited Edition. Special productions of Habanos made annually using fillers, binders and wrappers aged at least 2 years before the cigars are made. The wrappers come from the top leaves of the shade-grown (tapado) tobacco plant, which are darker in colour. Boxes can be identified by an extra black and gold seal indicating that they contain Limited Edition Habanos and the year in which they were released. Each Habano is dressed with an extra band giving the same information.
Totally by hand. A description created in Havana to differentiate between Cuban methods of making cigars by hand from the semi-mechanised metods used elsewhere that can legally be described as "Hecho a Mano" or "Hand Made".
Hunters & FrankauLa Casa del Habano