Hoyo de Monterrey is modernising with a new heavy ring gauge vitola for a historic line that is reinventing itself and expanding: Serie Le Hoyo. 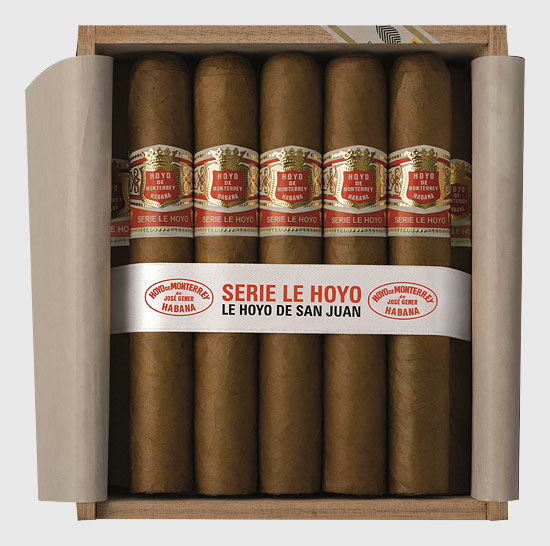 This new vitola’s blend only uses and leaves from San Juan y Marti?nez, the historic Cuban Denomination of Origin where the brand was born in 1865.

All the Hoyo de Monterrey vitolas are made Totalmente a Mano con Tripa Larga -Totally hand made with Long Filler-.

The light flavour of its blend makes it an attractive option for those who like a lighter Habano that is delicate and aromatic, as well as exceedingly elegant and complex.

The brand includes historic vitolas such as Double Corona and the prestigious Epicure Series with its No. 1 and No. 2 vitolas, further enhanced in 2008 with Epicure Especial. Some years ago the first Petit Robusto was launched by Habanos, shorter than the robusto and with a 50 ring gauge. The pioneering brand was Hoyo de Monterrey. It has been one of the Habanos of choice ever since for those who like a heavy ring gauge but have little time to enjoy one.

Another stand out of the brand is the Le Hoyo series, which was traditionally known for its slender and medium ring gauge.

Le Hoyo de San Juan, the new vitola that is going to enhance this historic line, is a highly novel launch for two main reasons:

The and leaves that make up the Le Hoyo de San Juan blend come from San Juan y Marti?nez* (D.O.P.) and have the unique flavour that the rich San Juan soil bestows.

Le Hoyo de San Juan, therefore, maintains the light flavour characteristic of Hoyo de Monterrey, while bringing to this new vitola the unique consistency and intensity that the San Juan soil confers on the leaves that are grown there.

but consistency and balance at the same time. Le Hoyo de San Juan will initially be available in the brand’s classic Cabinet Selection or Slide Lid Box (SLB) of 25 and 10 units.

These boxes also include new innovations in the brand’s image. Firstly the adhesive papeleta -rectangular seal on the short side of the box – on the boxes of 10 and 25 units, and also the new white ribbon that adorns the boxes of 25 units. These help enthusiasts of the brand identify this new Hoyo de Monterrey vitola.

Lastly, Le Hoyo de San Juan presents the new Serie Le Hoyo band that identifies this new vitola with its characteristic red colour at the bottom and heightens the image of the brand in this Series, which is being updated.