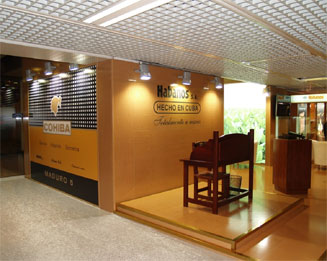 The 21st Edition of the Tax Free World Exhibition announced that nearly 500 companies representing thousands of brands were present at the show, which was themed: “Brand the World-Ask for the Moon” including all the major tobacco suppliers.

The event which opened in the Palais des Festivals et des Congres, Cannes on Monday 22nd October, is a landmark in the calendar of the duty free and travel retail industry and attracts more than 5000 visitors during the week including buyers form airports, airlines, ferry and cruise operators as well as other duty free operators all over the world.

It’s important to note that in spite of the impressive development of other categories, tobacco remains an important driver of footfall in DF and TR stores so the TWFA successfully negotiated a special derogation of tobacco restrictions back in May, which enabled tobacco suppliers to participate fully in the show by displaying or sampling their products.

On October 23rd, -in an already well-gained space for the Habano and especially for the products exclusively made for the channel- the H.Upmann Cocktail for the launching of the H.Upmann Travel Humidor took place. The world premier of this product, especially made and conceived for the Habanos loving frequent traveller, occurred between 19:00 and 21:00 hrs and the venue chosen for the event was the L’ Escala hall at the Noga Hilton Hotel.

Afterwards, the Institutional Gala Dinner began with the participation of many Exclusive Distributors and their main clients at the channel, Duty Free operators and airport representatives among other important celebrities that honoured the Grand Salon at the Carlton Intercontinental Hotel. Guests were pleased with the selection of Habanos offered which included the entire line of Cohiba Maduro 5, and brands like Montecristo and H.Upmann. All of them tasted and highly celebrated by the attendees.

Habanos s.a. also presented a selection of its flagship products at Travel Retail along with a sample of its 2007 Limited Edition vitolas as follows: Escudos from Romeo y Julieta; Regalos from Hoyo de Monterrey and Ingenios from Trinidad which are not listed on the regular portfolio of these brands.

Habanos business at the channel is certainly on the rise. The two-digit growth in a year period is expected to continue. Representing 22% of the Habanos total business, the DF and TR operations were drawing a lot of attention not only against other tobacco-related items but compared to other products at the channel. Habanos s.a. also attended to The Annual General Meeting held during the TFWA as a member.

Visitors who came to our stand were pleased to see the art of rolling a Habano being performed by a Cuban high-skilled roller. The Habanos booth was full of life and smokers could certainly feel the exclusivity by looking up at the unique selection of the products shown.

It was a week to remember, fully complemented with aromas and flavours of the Habano, French gourmet wines and special dishes. Also a great opportunity within the event to review the agreements made for the channel and follow up the most important topics of the industry.